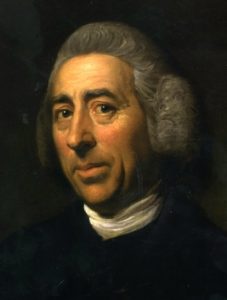 [Transcribed from an unknown newspaper cutting]

‘February 6, 1783, about nine o’clock, died Lancelot Brown, Esq. of Hampton Court, aged 67. His death was probably occasioned by a violent blow he received falling in a fit in the street as he was returning from a visit at Lord Coventry’s house in Piccadilly to the house of his son-in-law in Hertford Street.

‘For above thirty years he had laboured under a very troublesome asthma, and though he bore it with an uncommon degree of fortitude and good spirits, yet at times it reduced his life to alarming situations, and had lately prevailed so as to make him consider himself as drawing near that period, which he believed (with great strength of mind and resignation) as the price of a future state of perfect happiness.

‘His great and fine genius stood unrivalled, and it was the peculiar felicity of it that it was allowed by all ranks and degrees of society in this country, and by many noble and great personages in other countries.

‘Those who knew him best, or practised near him, were not able to determine whether the quickness of his eye, or its correctness, were most to be admired. It was comprehensive and elegant, and perhaps it may be said never to have failed him. Such, however, was the effect of his genius that when he was the happiest man, he will be least remembered; so closely did he copy nature that his works will be mistaken.

‘His truth, his integrity, and his good humour, were very effectual, and will hold a place in the memory of his friends, more likely to continue, though not less to be esteemed. ’